Suppose it's the early 1990's and you're James Gosling implementing String.substring(int, int) for the first time. What should happen when the index arguments are out-of-range? Should these tests pass? Or throw?

In a forgiving API, these tests pass. The implementation would recognize the out-of-range indices and correct for them. Benefits of forgiving APIs:

In a strict APIs, the out-of-range arguments to substring are forbidden and the method throws an IllegalArgumentException. Benefits of strict APIs:


For maintainability, I almost always prefer strict APIs. I like to think of the classes in my code as the gears in a fine Swiss watch. Everything fits together tightly, with firm constraints on both the inputs and the outputs. I can refactor with confidence because the system simply won't work if I've introduced problems into it. With a forgiving API, I could introduce bugs and not find out about them until much later.

Our application has two implementations for one interface. EnergySource is implemented by both Plutonium and LightningBolt:

And to allow for sequels, we assume other implementations of EnergySource are possible. We'd like to create an Injector immediately and create a Plutonium-powered DeLorean. Shortly thereafter, we'd like to re-use that same Injector, but with a lightning bolt for energy. 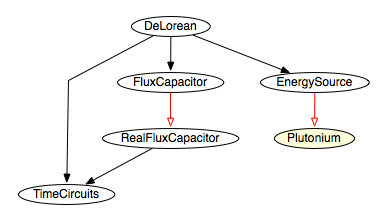 We can solve this problem by introducing a DeLorean.Factory interface that accepts an EnergySource as its only parameter:

This works for our specific problem, but in general it's quite awkward:

AssistedInject is a Guice extension that's intended to reduce the boilerplate of option one. Instead of a factory class, we write a factory interface plus annotations:

This fixes some problems. But the core issue still remains: getting an instance of EnergySource is difficult. Unlike regular Guice (@Inject is the new new), you need to change all callers if you add a dependency on EnergySource.

The premise is simple. @Inject anything, even stuff you don't know at injector-creation time. So our DeLorean class would look exactly as it would if EnergySource was constant:

The injectors share singletons, so we don't have to worry about having multiple TimeCircuits. Static analysis is applied to both injectors as a whole, where complete information is known. And all objects are in-the-club and get Guice value-adds like injection, scoping and AOP.

This is the solution to the mystical Robot Legs problem, wherein we have a RobotLeg class, that needs be injected with either a LeftFoot or a RightFoot, depending on where the leg will ultimately be used.

They suggest competing bindings. One parent injector could have relations with multiple child injectors. In our example, the parent injector binds DeLorean and TimeCircuits, and each child binds a different EnergySource.

They require abstract Injectors. The parent injector in our example wouldn't be able to create an instance of DeLorean, since it doesn't have all of the prerequisite bindings. This is just weird.

They're complex. Guice was born out of making code simpler. Does the conceptual weight of hierarchical injectors justify their inclusion?

Today's Guice includes a simplified implementation of hierarchical injectors written by Dan Halem. It doesn't cover the interesting (but complex) case where the parent injector cannot fulfill all of its bindings. I'm studying the use cases, trying to come up with a balance between ease-of-use and power.

For example, one idea is to require users to explicitly call-out bindings that child injectors will provide:

I'd also like to do something similar to AssistedInject's factory interfaces. This way the second injector would be created, used and discarded transparently, so the user never needs to see it. From the user's perspective, this would just be like AssistedInject, but the assisted parameters could be injected anywhere.

If you have suggested use-cases or ideas, I'd love to hear 'em.

One of the nice new features of Guice 2.0 is the new introspection API. It's the equivalent of java.lang.reflect for Guice - it lets you inspect your application at runtime. Our goal is to make it easy to write rich tools for Guice. A natural use case is visualizing an application. The right graph can reveal the structure of your application. I've opened a feature request for this, Issue 213. I created a proof-of-concept to drum-up excitement for this idea.

My Grapher code takes the above Injector and outputs a .dot file that describes a graph:

Finally, Graphviz renders the .dot file to a pretty picture:

This graph is a good start, but there's a long way to go. Unfortunately, I don't have the bandwidth to take this project to completion and am seeking a contributor. If you're interested, post a note on the issue. Coding is its own reward!

The critical question: should these tests pass?
Currently these are non-equal, so Guice has special cases so that they both work. But some special cases are missing! Consider issue 116:

Should Key be fixed?

Yes. I think I'll change Key so that it always uses Integer.class, regardless of whether it was created with int.class or Integer.class. Otherwise, this stuff is just too prone to bugs. For example, our new Binder SPI can return Provider<int>, even though that's not a valid type.

Probably not. I'm leaning towards leaving it as-is. Consider an interface with these methods:
If I change TypeLiteral, then the "remove" method is ambiguous when I know the TypeLiteral of the parameter type. But as a side effect of being inconsistent with Key, this test will always fail:
I think it's a fair compromise.

By making my changes to Key and TypeLiteral, I can make Guice behave consistently throughout all of its APIs. I won't have to worry about users who bind both int.class and Integer.class. And I should be able to rip out some special cases both Guice and its extensions.

If there's a Guice issue that's you'd like fixed, this is a great time to get your feelings heard. I'm spending a lot of time on the issues list, trying to decide what will make the cut for 2.0.