Externally, Glazed Lists is all lists. No other ADTs - no heaps, trees or graphs - just lists. But internally, much is implemented using trees. For example, FilterList remembers which elements are filtered out using a custom AVL-tree called Barcode. SortedList maps indices using two instances of our custom IndexedTree class. And since version 1.6, ListEvents keep track of change blocks using yet another custom tree called BC2. Since each tree has different requirements we need different implementations:


It's quite unpleasant to have 3 implementations of the same basic concept, especially since each is particularly complex. Plus, the different trees haven't been uniformly tested, optimized or even documented.

This problem has prompted me to spend the last week or so to unify our internal tree classes. The first step has been removing IndexedTree from SortedList, replacing it with an improved BC2 Tree. BC2 is our best and fastest tree but it needed sorting support to be used in SortedList. I added the required fields and logic and after some effort I had it working with SortedList.

But BC2 maintains state that SortedList doesn't need, which makes it slower than IndexedTree.

Since I'm sure Glazed Lists users wouldn't like to see a performance regression, I had a problem. Options:


Yikes. I decided to go with a modified version of option 3. If I were to create a one-time copy of BC2, each time I fixed a bug or optimized something in BC2, I'd need to do it twice. Yuck. Instead, I annotated the source of BC2 using M4 macros to designate which fields and methods are not needed by IndexedTree. Then I can run a quick ant script and generate the 'light' version of BC2.java whenever necessary*.

The result of all my hackery? SortedList is 5-10% faster than before.

* Why do the dynamic stuff at build time with hacks like M4 macros rather than runtime with elegant abstractions like interfaces? Interfaces are great but in this rare, performance-critical situation, the runtime cost of dynamic method invocation is a dealbreaker. I ran tests with Japex comparing both approaches, and even with Hotspot magic, the M4 solution is 20% faster. 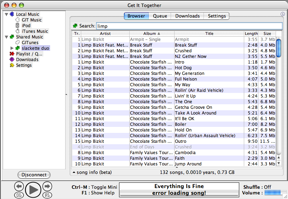 If you use iTunes streaming, you'll know how annoying it is that you can't download other user's tracks. Get It Together is a pretty simple Java app that solves this problem. If you've got two computers and you need to move music around, it's a great tool in a pinch. It works through Bonjour and DAAP, so there's absolutely no setup. It'll even work on Linux!

And the best part? Glazed Lists is inside.

Using m4 as a macro processor for Java, the nice way

For reasons I won't disclose, I've come to need a macro processor to generate a bunch of .java files. Somebody at work is using m4 for a similar task, so I decided to try it. Unfortunately, using macro processors with Java brings a huge problem - you typically cannot use an IDE like IntelliJ to edit the raw files. For example, this trivial macro program cannot be parsed by IntelliJ:

After running it through m4 (first adding the standard m4 forloop), the output is compilable:


But I'd like to have my cake and eat it too. I'd like to be able to edit a .java file that is both well-formed and contains macros! To make this possible, I need alternate code for every piece of macro code that I write. This alternate code serves many purposes:

So fine-grained events are more detailed, but more complex as a consequence. What's the benefit?

Suppose you're writing a World Cup app and have a List

JSR 295: the future of observable lists?

JSR 295 will create a spec to bind plain old Java Objects to Swing components. Its a great idea which will increase productivity for Swing developers.

Ultimately the spec will include bindings from java.util.List to components like JTable and JList. This tiny subproblem is what I've spent the last 3 years working on with Glazed Lists, and if done right it will make Glazed Lists mostly irrelevant.

What I fear is that should JSR 295 be done wrong, it may still make Glazed Lists irrelevant! Therefore I think my best option is to embrace JSR 295, and hope that someday Glazed Lists will complement it rather than competing with it. This is the same approach as Hibernate+EJB 3.0 or util.concurrent+java.util.concurrent, albeit not nearly as high profile.

Therefore over the next few months I plan to blog about Glazed Lists' design, with hopes of influencing development of the JSR. I'm going to get into low level API and implementation details, discussing both the strengths and weaknesses of our approach. Finally, note that I have offered to donate all or any of Glazed Lists source code to the project.

With Java's String class, there's a 2 arg constructor that takes bytes and charsetName:

The second line doesn't compile because there's no getCharsetName() method on String.

Why? Internally, Strings are always UTF-16, regardless of what charset was used to create them. The String(byte[],charset) constructor converts the bytes into UTF-16 characters using the charset as a guide.

This turns out to be very handy:

Unit testing has spawned a new type of development, test driven development. In TDD, test coverage leads the way in development, and it's a great way to develop new functionality.

Unfortunately performance tuning hasn't kept up with unit testing in terms of tools support and ubiquity. Usually when Java developers do performance tuning, it seems the strategy is generally ad-hoc and untargetted. I am certainly guilty of using this approach, and the code I've written suffers as a consequence. My ad-hoc approach is lame:

Canonical path of a file in Bash

In Java, it's pretty straightfoward to take any abstract pathname (such as ~/Desktop/regina.jpg) and convert it to it's canonical pathname, /Users/jessewilson/Desktop/regina.jpg. Sometimes I find myself needing this function when writing simple shell scripts in Bash, and Google Groups showed me how.

Save the following text to a file called canonicalize, add it to your $PATH, and chmod it so it's executable:


Then you can use the location of a partial filename, even if you change directories: