VB on the JVM

For years, we Javaers have been comparing Swing to VB, particularly with respect to ease of development. The conclusions usually involve Swing being much more difficult and much more powerful. I agree with this, but I also think Swing left out some critical APIs for way too long which made the platform more difficult:

The next rev of Glazed Lists is out, 1.6.0. This is an interim release while I try to find time to rework how ListEvents are created, stored and managed. Hopefully things will get a lot more powerful for 2.0, and this paves the way. Plus James has added some killer extensions. Check it out.

There's been some discussion on the lists at work about SimpleDateFormat. Apparently it's not safe to be used by multiple threads simultaneously, despite the fact that the format() method doesn't appear to mutate the state of the object. It's a huge design flaw that has bitten many a developer in the ass.

The discussion turned to possible workarounds and speculation on their comparative performance. Here's the contenders and my speculation:


Well having placed my bets on the synchronized shared instance, I decided to write a bit of code and benchmark the four options. Here's the results, as obtained unscientifically on my Mac Book Pro:

The results are surprising - ThreadLocal is the clear winner, 50% faster than synchronized(). But don't take my word for it. Critique and tweak SDFPerformance.java and run your own tests.

Why no API docs?

I'm preparing the latest release of Glazed Lists, and as with every release I'm going to post the Javadocs online. Posting the Javadocs on the public Internet is pretty easy and it provides some nice benefits:

Both Rich and Thin

There's an ongoing battle between rich and thin applications. Rich client applications like iPhoto are powerful and productive. Thin client apps like Flickr are easy and connected.

Lately, it seems like the industry is going thin, but I think eventually both application styles will converge. Internet applications with rich-client frontends offer the best of both worlds, and they're already in wide use:

Corel Draw 11 crashing on Mac OS X? I have tips!

Last night I ran software update on my Mac Book Pro, bringing me up to Mac OS X 10.4.6. And today? Corel Draw 11 crashes on startup!

Fortunately, I've been in this situation before. Today's solution is a natural one: go to /Users/jessewilson/Library/ and delete the folder named CorelDRAW 11 Preferences. Then launch Corel Draw 11.

If you're having other problems starting Corel Draw, there's a variety of ways to revive the now-unsupported graphics application:

Each time I rebooted, it beachballed on or right before the "Starting Mac OS X" progress bar screen. Fortunately, a kind soul on the Apple forums provided a solution - reboot into "safe mode" and move everthing out of /Library/StartupItems/.

This sucks. I'm always encouraging my friends & family to switch to Mac, and everytime I run into shit like this I feel like a clown.

Rounded Corners as a Swing Border 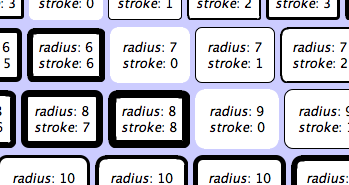 In order to get a desired effect in the Glazed Lists issues browser, I created a border with rounded corners, a la Web 2.0. Implementing the painting logic was tedious, but not particularly difficult -- there's a lot of "magic-numbers" Java2D code to write, such as offsetting by the stroke width and figuring out the stroke angles.

If you want your Swing app to look Web 2.0, please take RoundedBorder.java and contribute back your enhancements & fixes!